Beyond Telling a Story

I tell stories.  It began many years ago during lunchtime in my classroom with my preschoolers.  I told a story about my childhood, The Peanut Man, which has become a classic story that children beg for, along with at least fourteen other stories.  Yes, my stories actually have names.  Imagine that!

My storytelling grew.  They were all true, and every time I told a story I began with, “It happened like this”.  That phrase has now become a magnet.  When children hear those words, they are glued to my story.

Storytelling was also the start of my writing.  I began writing newsletters to the parents and families of my preschoolers.  I realized that telling children about my childhood adventures was as important as telling parents about the meaningful things that happened in my classroom.  Both mattered.  Both made a difference.  My writing grew tremendously because parents needed to know not only what was happening in the classroom, but why it was important.  I became a storyteller of sorts, in writing, for parents and families.

Then I had children write picture stories, encouraging them to express themselves and tell their own stories.  Children seem to change when we sit down together and I ask them to tell me their story.  They are empowered, so the stories they tell are really interesting and full of language.  Too many people underestimate children.  They have much to say!

Now, I realize that everyone has an important story to tell.  They just need to be asked.  Passing down oral history has been a mainstay since the beginning of mankind.  I have started to do just that.  Last week while traveling to Virginia, My husband and I stopped at a favorite pottery store close to the Bay Bridge Tunnel on the Eastern Shore.  I asked the shopkeeper to tell me his story… 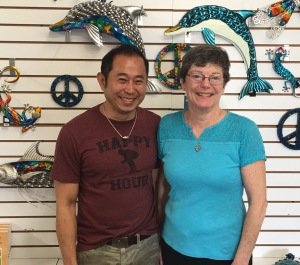 Theany Tor grew up in Cambodia.  In 1975 at the age of thirteen, he and his family were in the middle of the Revolution, right in the heart of the crossfire.

“The Revolution was coming for the residents of the city.  My Dad heard men say about a meeting and handcuffing everybody.  He tell me, “They don’t take you and kill you.  They tell you to go to meeting in town.”  My Dad and older brother and older sister go to the meeting.  My Dad said to me, “Run!  Run!”  I run back home for one night and two days.  Then I go to the jungle.  My Dad was killed.  My older brothers and sister were killed.”

At this point in his story I was captivated, overwhelmed, touching history… you get the picture.  I asked questions, plenty of questions.  I asked Theany, “How long did you live in the jungle?”  Without hesitating he boldly answered,

I hardly knew what to say.  Clearly this was a most significant point in his life.  He pulled out postcards of Cambodia and wanted me to have them. 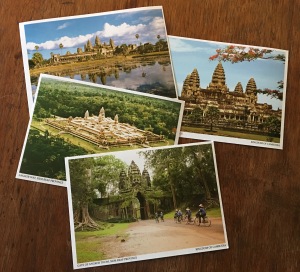 The photos were a link to his childhood.  He wanted to pass along his story.  I felt honored, and humbled.  Theany then said,

That is the story of Theany Tor, a smiling, friendly man.  A shopkeeper.  He had a story to tell, as we all do.  I now have added “Tell me your story” to my quest.  Oral history is alive in my world.

I have been teaching preschool for over thirty years. This is my passion. I believe that children have a voice, and that is the catalyst to enhance or even change the learning experience. Emergent curriculum opens young minds. It's the little things that happen in the classroom that are most important and exciting. That's what I write about. I am highlighted in the the new edition of Jim Trelease's bestselling book, "The Read-Aloud Handbook" because of my reading to children. My class has designed quilts that hang as permanent displays at both the National Liberty Museum in Philadelphia, and the Fisher House at the Boston VA Hospital.
View all posts by Jennie →
This entry was posted in Early Education, Learning About the World, storytelling, Teaching young children and tagged Cambodia, Early Education, oral history, telling your stories. Bookmark the permalink.

64 Responses to Beyond Telling a Story