I often write about language and literacy because reading aloud and hearing all those words are what makes the difference in learning.  I want to introduce a new word into the mix: conversation.  That involves more than listening; it implies that we also process the information we hear…and then talk about it.  Conversation.

This week I read a book that our pen-pal preschool class in Prague loves, Little Mole and the Snowman.  Well, we definitely loved it, too!  It sparked more conversation than my preschoolers have had with a book in quite a while. 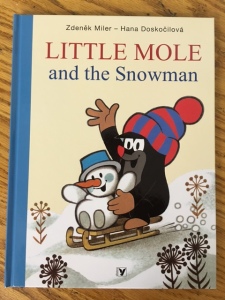 The story was similar overall to many American picture books, yet different in the details and smaller parts of the story.  For example, in Prague most children would be familiar with mountains that are snow covered for most of the year.  That element alone, which was a thread in the story, was different.  Then, there were rescue dogs, the Saint Bernard that rescues people from snowy mountains, and the aerial tram (cable car).  The children were drawn to all the differences, and that sparked conversation.

Little Mole and the Snowman raised that bar of conversation.

A recent issue of The Atlantic featured an article titled  “The New Preschool is Crushing Kids” by Erika Christakis. http://www.theatlantic.com/magazine/archive/2016/01/the-new-preschool-is-crushing-kids  It is a great read, and her point boils down to conversation.  Schools today need to meet the standards, and teachers need to follow a curriculum that involves give and take, question and answer, in order for students to learn.  The problem is, they’re not learning.

Edward Zigler, a Yale professor and leader in child development and early education for a half a century, noted that in the best preschools children are given the opportunity to use and hear complex, interactive language.  Yes!  He is so right.  It’s not just asking and answering a question, it’s the dialogue that happens.  Children have to think and process what they hear, and then have a conversation.  That is learning.

The Atlantic article also notes that the focus should not just be on vocabulary and reading, but on talking and listening.  Conversation is gold.  It’s the most efficient early learning system we have.

This is what I do, every day.

I have been teaching preschool for over thirty years. This is my passion. I believe that children have a voice, and that is the catalyst to enhance or even change the learning experience. Emergent curriculum opens young minds. It's the little things that happen in the classroom that are most important and exciting. That's what I write about. I am highlighted in the the new edition of Jim Trelease's bestselling book, "The Read-Aloud Handbook" because of my reading to children. My class has designed quilts that hang as permanent displays at both the National Liberty Museum in Philadelphia, and the Fisher House at the Boston VA Hospital.
View all posts by Jennie →
This entry was posted in Teaching young children, Uncategorized and tagged Conversation, emergent curriculum, language development, learning, reading aloud, teaching young children. Bookmark the permalink.