More at The Carle, the Art of Maira Kalman, and “Fireboat”

After visiting the Angels exhibition at the Eric Carle Museum, I viewed the art of Maira Kalman. 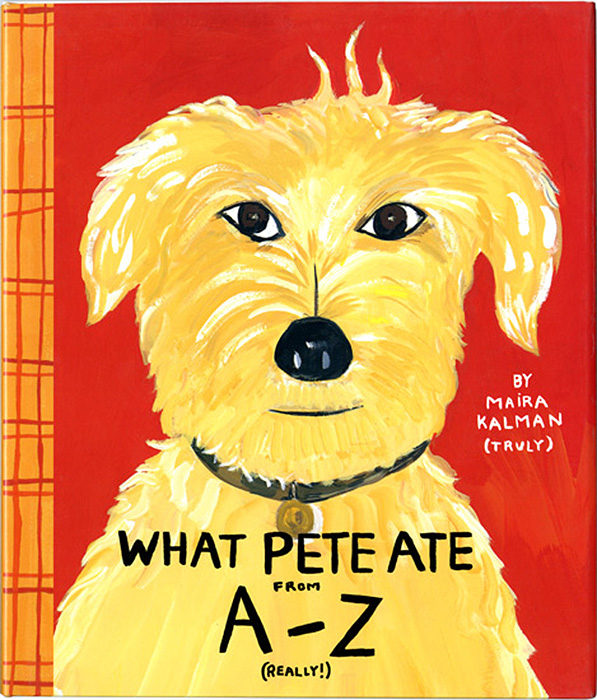 I knew this dog, at least I thought I did.  While there was something familiar here, I had to admit I don’t really know the author or her books.  It’s a good thing I toured her exhibit.  What I recognized was her style.  Most of Maira Kalman’s art that I had seen was on many covers of The New Yorker magazine.  How prolific to write and illustrate children’s books, and also grace the covers of well known magazines.

There’s more.  Maira Kalman illustrated the book, The Elements of Style, co-authored by William Strunk and E.B. White.  This book is a classic for writers.  I was both impressed and surprised to learn that she did the illustrations.

Here’s where it gets even better.  Alongside every exhibit at the museum are the books by the author and illustrator.  Visitors can sit and read while admiring the art. Which is exactly what I did.  Thank goodness, as I discovered Fireboat, The Heroic Adventures of the John J. Harvey.

Are you familiar with the John J. Harvey fireboat?  I wasn’t either.  It was launched in New York City in 1931, the same year Babe Ruth hit his 611th home run, and Snickers hit the candy stores.  The popular word Hot-Cha was invented.

The book opens with events and structures in New York City, such as the George Washington Bridge suspended over the Hudson River.

All the illustrations are beautiful.  The reader becomes part of the city in years gone by. Time passes.  We learn about the working parts of the fireboat and the crew.  The John J. Harvey helps to fight the fire on the ocean liner NORMANDIE.  Sometimes it goes out in the water just to celebrate, shoot water, and have fun.

By 1995 there were many fireboats, and the Harvey was set to be retired and sold for scrap. Of course the people who loved her rallied to save and buy the boat.  She was repaired and spent her days on the water, visiting other boats.  Did you know that four toots means hello?

The John J. Harvey wanted to help and get back to work.  We learn what each crew member was doing at the time, before they rushed to the fireboat.  No, she was too old to fight the fires, but she could help rescue people… and then at last she got “the call”, she was needed to supply water to the firefighters.  She was once again a real fireboat.

Can you see the many firefighters in this illustration?  That is one of the paintings at the exhibit.  A lump-in-your-throat painting.  The John J. Harvey was a hero.  The book shows the award she received, and a beautiful illustration of the harbor and the fireboat.  Among the last words are, “All that’s left to say is HOT-CHA and thank you.”

You can believe I will be reading this book to children.

Thank you to the Eric Carle Museum for another wonderful exhibition.  I learned much.  I am once again filled up.

I have been teaching preschool for over thirty years. This is my passion. I believe that children have a voice, and that is the catalyst to enhance or even change the learning experience. Emergent curriculum opens young minds. It's the little things that happen in the classroom that are most important and exciting. That's what I write about. I am highlighted in the the new edition of Jim Trelease's bestselling book, "The Read-Aloud Handbook" because of my reading to children. My class has designed quilts that hang as permanent displays at both the National Liberty Museum in Philadelphia, and the Fisher House at the Boston VA Hospital.
View all posts by Jennie →
This entry was posted in art, Book Review, books, children's books, Early Education, Eric Carle, Giving thanks, history, Inspiration, museums, picture books, reading, reading aloud, Teaching young children, The Arts and tagged 9/11, art, children's books, Eric Carle Museum, Fireboat, Inspiration, John J. Harvey, literacy, Maira Kalman, reading books to children. Bookmark the permalink.

52 Responses to More at The Carle, the Art of Maira Kalman, and “Fireboat”