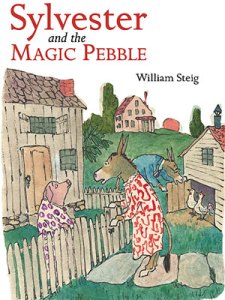 William Steig is one of my favorite author/illustrators.  I have most of his books.  I’ve been reading his books to children since I started teaching thirty-five years ago.  Sylvester and the Magic Pebble, one of his best, turned 50 years old this year.  It is as good today as it was 50 years ago.  The Eric Carle Museum in Amherst, Massachusetts is celebrating this Golden Anniversary with an outstanding exhibit.

Do you know what if feels like to see, up close, the original artwork of beloved books?  I do.

The brush strokes of the sun are clear.

A true starry night with many different blues. 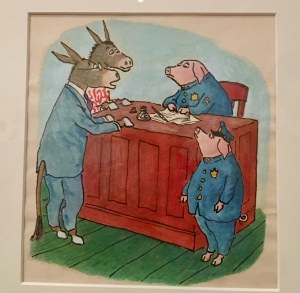 The book was actually banned for using pigs to represent police.

This is my collection of William Steig’s books.

It happened like this… Second grade.  I’ll never forget the parent teacher conference that year.  Our daughter loved the book Sylvester and the Magic Pebble.  Her teacher was concerned that the book and level of reading was too young.  “You should introduce her to books with more meaningful text.”

I was speechless.  The story encompassed everything – life and death, family, worry and joy – in language-rich prose.  There was more to this book than many other chapter books.  I wonder if the teacher had read the book.  If so, she might have had a different opinion.  Perhaps an epiphany.

There is much I have said about my visits to this remarkable museum. Please read below to get the big picture, the ‘meat and potatoes’, and some of what has happened on my visits.

I wrote this post about The Eric Carle Museum of Picture Book Art a few years ago.  Every visit is a joy.  There is always something new.  If you are an art lover and children’s book lover, this is the museum for you!

People think of an art museum as… art, single standing pieces on their own right. Imagine masterful, award winning art combined with the best literature, in one museum. Exciting? You bet!  A hidden gem in Amherst, Massachusetts.

What is your favorite childhood book?  Madeline?  Perhaps it is  Make Way For Ducklings.  There are so many.  The Eric Carle Museum of Picture Book Art is dedicated to the art of children’s book illustrators.  I thought this was interesting, then I visited the museum.  Oh, my!

The exhibit way back then featured Ezra Jack Keats, author of The Snowy Day.   I am a preschool teacher and have read this wonderful book to my class hundreds of times.  Yet, I never expected to come face-to-face with his art.  I did.  To my great surprise it was made from cut-out linoleum.  I couldn’t walk away or let that go.  I was witnessing the real art of his award winning book.

Much like seeing the ocean for the first time, I was stunned.

I love and appreciate art, and I’m passionate about reading children’s books. There I was, staring at both.  Every visit to the Eric Carle Museum of Picture Book Art has been equally powerful.  Yesterday was no exception.  But first, let me back up and tell you about Eric Carle.

One of the staples in children’s books is Brown Bear, Brown Bear.  No, Eric Carle did not write this book; it was the first book he illustrated, his big break into the world of children’s book illustration.  At the time Eric Carle was the art director for an advertising agency in New York.  His life, before then, is the most powerful story of an artist.  Ever!

He was born in New York in 1929 and moved with his family to Stuttgart, Germany in 1936 to be with relatives.  1936 in Germany?  Not good.  His father was drafted into the German army, and Eric and his family fled to Stollen in the Black Forest.

His schooling is fragmented, but he continues to draw and paint and looks forward to an occasional class with his high school art teacher Fridolin Krauss.

Aware of Carle’s promise as a young artist, Herr Krauss invites him to his home one day.  He shows Carle a box of “forbidden art” by so-called degenerate artists like Picasso, Klee, Matisse, and Kandinsky. “Their strange beauty almost blinded me,” recalls Carle.  His teacher warns him not to tell anyone what he has seen.  “But, for his act of defiance,” says Carle, “Herr Krauss…opened my eyes to the beauty of German Expressionism and abstract art.”

Eric Carle saw modern art, “forbidden art” of the great masters, for the first time in his life.  His teacher risked his own life to show Carle the art.  The seed was planted.  Every time I look at a Kandinsky or a Picasso, I think of that moment.  Art can change the world.  It did for Eric Carle.

That first book, Brown Bear, Brown Bear, is fifty years old.  It is a beloved classic throughout the world, having been translated into 31 different languages with 16 million copies sold.  Happy anniversary!  Here are world-wide covers of the book:

My preschoolers made a Brown Bear that we gave to the museum (which they displayed). 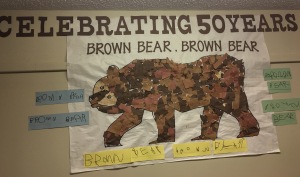 Fast forward to the museum.  They have displayed the original art of Robert McCloskey and Make Way For Ducklings, and the original art of Ludwig Bemelmans’ Madeline.  Up close, very close.  Every pencil line and brush stroke were visible.  I was inches away from the pictures I had only seen in picture books.  For a book lover, this is as good as it gets. 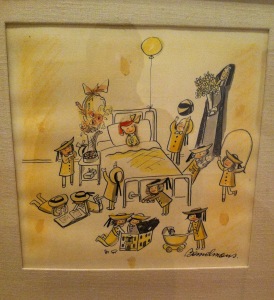 I recently saw the art of Hilary Knight’s Eloise, a beloved book from my childhood written by Kay Thompson.  As a child, every Sunday afternoon I would act out Eloise.  She was my first introduction to New York, and to bravery.  Eloise was brave.  She was a bit of a hero.

When real, award winning art is combined with the best literature, it is win-win, a grand slam.  Reading the picture books, time and time again, and seeing the pictures ‘live’ is grand, indeed.

There is more!  The best bookstore by far (coming from me- someone who knows good children’s literature) is right there in the museum.  A piece of heaven.

The Eric Carle Museum of Picture Book Art in Amherst, Massachusetts is a treasure.

I have been teaching preschool for over thirty years. This is my passion. I believe that children have a voice, and that is the catalyst to enhance or even change the learning experience. Emergent curriculum opens young minds. It's the little things that happen in the classroom that are most important and exciting. That's what I write about. I am highlighted in the the new edition of Jim Trelease's bestselling book, "The Read-Aloud Handbook" because of my reading to children. My class has designed quilts that hang as permanent displays at both the National Liberty Museum in Philadelphia, and the Fisher House at the Boston VA Hospital.
View all posts by Jennie →
This entry was posted in art, Book Review, books, children's books, Early Education, Eric Carle, Inspiration, museums, picture books, reading aloud, The Arts and tagged art, children's book illustrations, children's books, Eric Carle Museum, Eric Carle Museum of Picture Book Art, picture books, reading, Reading to children, Sylvester and the Magic Pebble, William Steig. Bookmark the permalink.