Every year children vote on their favorite chapter reading book.  Charlotte’s Web is the clear winner most years.  This year we voted on our favorite picture books as well.  That was a big challenge for children as we read at least one, and maybe two or three picture books a day.  You do the math: 180 school days. That’s a lot of books!

Of course we often read books multiple times.  Good books are meant to be read over and over again.

Here are the picture books children voted as their favorite: 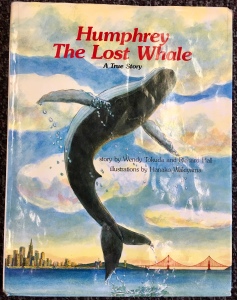 This is a true story of a whale who got lost in the San Francisco bay and swam the wrong way, heading up the Sacramento  River.  As the river narrows Humphrey somehow swims under a small bridge and becomes trapped.  He won’t survive long in fresh water.  Scientists come up with a clever plan to make Humphrey turn around and swim back to the ocean, but the danger is far from over.  The illustrations bring to life the geography of the Golden Gate Bridge, and the pathway of ocean to bay to river. 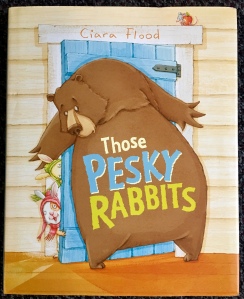 Bear lives alone and likes it that way.  A family of rabbits build a house next door and try to be friendly and neighborly with Bear.  Bear wants nothing of it and refuses their kind gestures of honey, firewood, and books.  The pesky rabbits keep trying, even ignoring Bear’s welcome mat that reads Go Away.  Then one day…. you’ll have to read the book. 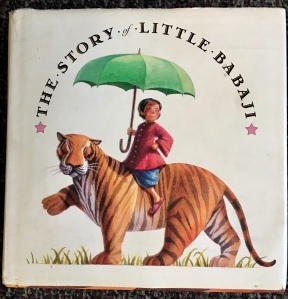 Helen Bannerman wrote this story in India in 1899.  You may remember the classic tale of Little Black Sambo, and tigers who run around a tree and melt into butter – unfortunately a rather racist version.  This book is the restored original story, the way it was written in 1899.  The repeated words of, “Little Babaji I’m going to eat you up” and the tigers dressing up in his clothing delight the reader.  Children enjoyed the book so much that we put on a play performance for families.  We even had a pancake maker. 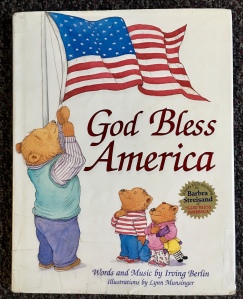 The beautiful illustrations in this book bring a favorite song to life.  Looking at mountains, prairies, the Statue of Liberty, and a parade of firefighters and police officers is what children enjoy seeing about America.  Did you know that Irving Berlin wrote this song because he felt that “The Star-Spangled Banner” was too difficult, and therefore disliked the song? 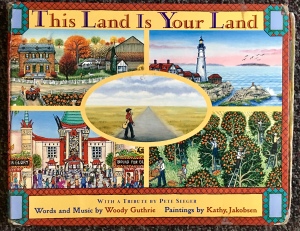 Woody Guthrie listened to “God Bless America” on the radio as he drove across America.  He disliked the song, and was inspired to write his own song about America – “This Land is Your Land”.  The book has been a favorite for the entire school year, inspiring the children to design and create a quilt.

Bruce is a grump.  He doesn’t like rain, he doesn’t like sun, and he doesn’t like cute baby animals.  What he does like is eating eggs, and when his eggs accidently become baby geese, he unfortunately becomes a mother.  The humor in this book has children and teachers belly laughing. 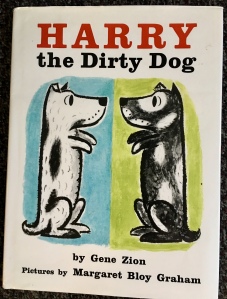 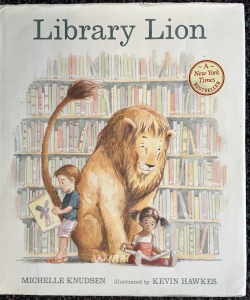 One day a lion shows up in the library.  As long as he follows the rules he is allowed to stay.  He becomes beloved to the children at story hour, and helpful to Miss Merriweather.  When an accident happens, the lion has to roar- which is breaking the rules, of course.  Will the lion ever return? 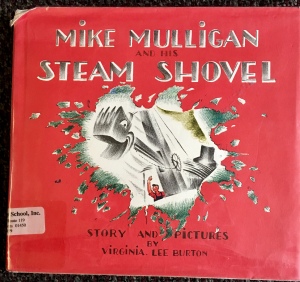 A good book never gets old, and after eighty years (yes, eighty!) this story continues to delight children.  Mike Mulligan is sad when steam shovels are no longer needed and give way to modern shovels, yet he won’t part with Marianne, his hardworking steam shovel.  When a job to build a new town hall is advertised, Mike boasts that Marianne can dig the cellar in a day.  Can she?  The illustrations help children to understand digging roads, tunnels, and canals through the obstacles of land and nature.

I applauded the children for voting on these outstanding books.

I have been teaching preschool for over thirty years. This is my passion. I believe that children have a voice, and that is the catalyst to enhance or even change the learning experience. Emergent curriculum opens young minds. It's the little things that happen in the classroom that are most important and exciting. That's what I write about. I am highlighted in the the new edition of Jim Trelease's bestselling book, "The Read-Aloud Handbook" because of my reading to children. My class has designed quilts that hang as permanent displays at both the National Liberty Museum in Philadelphia, and the Fisher House at the Boston VA Hospital.
View all posts by Jennie →
This entry was posted in America, Book Review, books, children's books, Early Education, Imagination, picture books, preschool, reading, reading aloud, reading aloud, Teaching young children and tagged "God Bless America", children's books, Harry the Dirty Dog, Humphrey The Lost Whale, Library Lion, Mike Mulligan and His Steam Shovel, Mother Bruce, picture books, preschool, reading, reading aloud, The Story of Little Babaji, This Land is Your Land, Those Pesky Rabbits. Bookmark the permalink.