Summer Camp is bonding.  It’s a memory builder.  The little things stick and accumulate, and become part of a big piece.  And, that big piece is important; it shapes the good stuff, what really matters, like developing a sense of wonder, a sense of humor, and compassion for others.

I know this to be true.  I’m the one who is there to witness the good stuff.  This is what happened on the last day of camp:

We plan a play performance for the rest of campers each session.  Children write the entire script and pick their own costumes.  Sometimes we “Army crawl” down the hallway to the storage room to sneak past everybody.  I say, “Is there anything in here you need?”  Even shy Kevin found a piece of brown cardstock paper and carefully cut out a small triangle for his tail.  He felt like a king.  So simple, yet hugely important.  The children think they have been given the key to a candy store.

I never underestimate the creativity of children.  Their ideas are far better than mine.  Here are a few photos and the plot of the play: 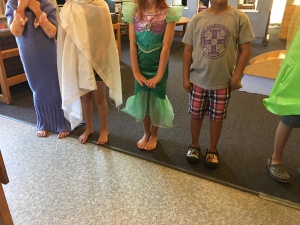 A fairy queen lived in a castle with her twin babies who cried all the time (of course I went to CVS to buy binkies for the babies- they loved it).  They wanted a pet.  The fairy queen took them deep into the forest where they found a frog.  The frog wanted to be their pet.  As they went back to the castle, they passed the river and saw a swan, two mermaids, and two water snakes.  The swan was training the water snakes to swim, one snake on his back, and the other snake on his belly.  Back at the castle, the babies were taking a nap and the fairy queen was cooking dinner.  Two robbers came to steal the pet frog!

Children decided to do individual skits: Esme danced to the “Mission Impossible” theme song.  Caylee quickly took off her mermaid costume and did gymnastics in her leotard.  Peyton did the hula-hoop.  And, Aedan sang “Raindrops on Roses” from The Sound of Music.  You could have heard a pin drop.

~Back to the play~ Lights. Camera. Action.

The mermaids saw everything, and warned the fairy queen that robbers had stolen the pet frog.  She called for the castle guard.  He summoned the ninjas to capture the robbers.  But, the ninjas needed the help of the police.  Together, they used a spider robot to find and scare the robbers.  They captured the robbers, handcuffed them, and put them in jail.  The police and ninjas then returned the pet frog to the fairy queen and her twin babies.  And they all lived happily ever after.  -The End-

It was a huge success!  When children are given the reins, freedom to make decisions, and plenty of encouragement, the results are remarkable.  This is a mantra of my teaching.

Laughing is always a big part of camp.  Sounds little?  Well, it’s not.  We all know laughter is the best medicine; imagine what it can do as part of every day, spontaneous and contagious.  Kind of like a vitamin for the soul.

And me, the counselor?  I probably laugh the hardest of all.  I have a big list of if only… for teachers, because all the good that happens in camp can also happen in the school year.  Even the littlest moments are part of something big.

If teachers could allow children to have some input in the learning process.  If teachers encouraged questions and discussions, even if was a little off-track (sometimes that’s the best learning).  If teachers really listened to children.  If teachers read aloud all the time.  And, if teachers said to their students at a random moment, “Have I told today you how much I love you?”  At the very least, giving a crazy, spontaneous, no-reason hug.  Works wonders.

I have been teaching preschool for over thirty years. This is my passion. I believe that children have a voice, and that is the catalyst to enhance or even change the learning experience. Emergent curriculum opens young minds. It's the little things that happen in the classroom that are most important and exciting. That's what I write about. I am highlighted in the the new edition of Jim Trelease's bestselling book, "The Read-Aloud Handbook" because of my reading to children. My class has designed quilts that hang as permanent displays at both the National Liberty Museum in Philadelphia, and the Fisher House at the Boston VA Hospital.
View all posts by Jennie →
This entry was posted in Early Education, Imagination, play performances, self esteem, Singing, summer camp, Teaching young children and tagged Early Education, emergent curriculum, listening to children, Play performance, summer camp, teaching young children. Bookmark the permalink.

63 Responses to Last Day of Camp