Classical Music is the Inspiration for Art

Yesterday I introduced classical music to my preschool classroom, and  it was one of my best days of teaching.  This story has added wonderful twists and turns; the art of Eric Carle and Wassily Kandinsky, and the new Caldecott Honor Book, The Noisy Paintbox: The Colors and Sounds of Kandinsky’s Abstract Art which I introduced in a previous post.

I brought my old record player to school and put it in the middle of the floor during our Morning Meeting.  “What do you think this is?”, I asked.  Miles said, “It looks like a suitcase that you take on a train.”  It does look like that.  Then, I opened it up to fifteen silent, transfixed preschoolers.  We looked at the parts, moved the turntable and the arm, and then turned it on.  I lifted the arm to explain that there is a needle underneath, and then rubbed the needle so they could hear the sound.  That was exciting! 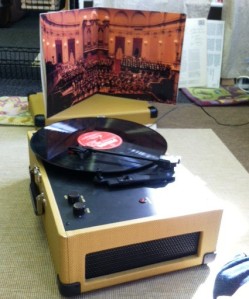 I pulled out three old albums, explaining to the children that this was music, like a CD.  In past years I have played Vivaldi – The Four Seasons or Handel’s Water Music as an introduction to classical music.  This year I played Beethoven’s Symphony No. 9.  I’m so glad I did!  The beginning is soft, so children had to pay close attention to hear the sounds.  As soon as the music of the symphony swelled, so did the children.  They lit up like a Christmas tree, and really heard all the instruments and sounds.  Megan was the first to blurt out, “I heard violins!” in the same voice as if she had found her long lost dog.  Sammy couldn’t believe he actually heard drums.  Every time they played he yelled, “I heard drums!”  We listened and tried to classify instruments for a long time.

What is it that makes this work?  Why does classical music have such a powerful effect on young children?  Listening comprehension is a huge reservoir in a child’s brain.  I know because I fill that reservoir every day with words from picture books and chapter books when I read aloud.  Yet, this music seems to do more than fill the brain.  It fills the heart as well.  Children not only search for the sounds, they feel them.  Hans Christian Anderson said, “Where words fail, music speaks.”

I opened my album cover, and low and behold there was a panoramic photograph of an orchestra.  Sammy nearly jumped out of his skin.  We had to stop and talk about a symphony, an orchestra, an audience and a conductor.  We found the instruments.  The cello is not familiar to the children, which just fuels my fire to teach them about the cello.  Emergent curriculum, you know.

As we played Beethoven’s Symphony No. 9, children wanted to dance.  That has never happened before when I played classical music in my classroom.  I was as thrilled as the children.  When a boy decided to join the dancing with gym type moves, Esme said, “This is regular, fine dancing.”  He agreed and joined in.  I sat back and watched six children dance to Beethoven – spontaneously responding to the music they heard in their own way.  Clearly, Beethoven has become an instant hit with preschoolers.  Wow!

Listening to classical music is the first step I take in my classroom when we introduce serious art, meaning creating art that is worked on over time in order to become a ‘masterpiece’.  Music inspires art.  The two naturally go hand-in-hand.  Of course I do art and music all the time in my class, but I’m talking about a much higher, more in-depth level.  When I introduce Beethoven or Handel, I introduce Picasso or Monet.  I take the time to teach children to hear sounds and learn about instruments, and to use proper paints and brush strokes.  Our art progresses as we listen to the music.  We use real watercolors from tubes, and we work on those ‘masterpieces’ over and over again, alongside Beethoven or Mozart or Vivaldi.

The power of art and music is just as important today as it was centuries ago.  I think Beethoven would smile, and would approve of our abstract art.

I have been teaching preschool for over thirty years. This is my passion. I believe that children have a voice, and that is the catalyst to enhance or even change the learning experience. Emergent curriculum opens young minds. It's the little things that happen in the classroom that are most important and exciting. That's what I write about. I am highlighted in the the new edition of Jim Trelease's bestselling book, "The Read-Aloud Handbook" because of my reading to children. My class has designed quilts that hang as permanent displays at both the National Liberty Museum in Philadelphia, and the Fisher House at the Boston VA Hospital.
View all posts by Jennie →
This entry was posted in Teaching young children, Uncategorized and tagged abstract art, Beethoven's Symphony No. 9, classical music, classical music inspiring art, emergent curriculum, learning through music, music, preschoolers and classical music, teaching art, teaching young children, Wassily Kandinsky. Bookmark the permalink.

3 Responses to Classical Music is the Inspiration for Art