It happens every year.  Gloria comes to school, and children are wide-eyed.  Silent.  Maybe scared.  And somehow, she becomes a friend.  Well, not exactly.  She becomes herself, and children want to be her friend.

It started with Eddie.  He was smiling and waved.  He wanted to shake Gloria’s hand.  James did not.  He watched, he listened to his classmates who had older siblings that knew Gloria.  Suddenly he burst out, “Gloria, I have a sister!”

Gloria told the children she was shy and scared.  She told them that she had been called unkind words, and that’s why she became an Aqua Roomer.  The children listened.  Children have big hearts.  Sometimes they just need a reason to share that heart. 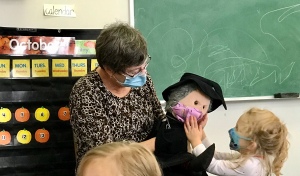 Do you have ears?

Has she been pumpkin picking?

Gloria, how did you get to school?

When Gloria’s ‘meet and greet’ was over, it was time for a story.  Nolan spoke up:

Can she sit with me? 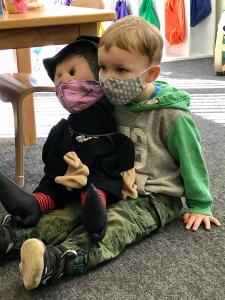 She did.  Thank you for taking such good care of Gloria, Nolan.

I have been teaching preschool for over thirty years. This is my passion. I believe that children have a voice, and that is the catalyst to enhance or even change the learning experience. Emergent curriculum opens young minds. It's the little things that happen in the classroom that are most important and exciting. That's what I write about. I am highlighted in the the new edition of Jim Trelease's bestselling book, "The Read-Aloud Handbook" because of my reading to children. My class has designed quilts that hang as permanent displays at both the National Liberty Museum in Philadelphia, and the Fisher House at the Boston VA Hospital.
View all posts by Jennie →
This entry was posted in Diversity, Expressing words and feelings, Gloria, Inspiration, Kindness, preschool, Teaching young children, wonder and tagged Caring, Children have big hearts, Diversity, Gloria, Inspiration, preschool, Puppets in preschool, Teaching Diversity. Bookmark the permalink.