Rodgers and Hammerstein, My Mother, and Me

It was my tenth birthday.  Ten was the age when we graduated from birthday parties with paper hats and streamers and playing ‘Pin the Tail on the Donkey’. For my birthday I had the choice of taking three friends to Camden Park, an amusement park, or taking one friend to see Oklahoma on stage.  I picked Oklahoma.  I chose wisely. 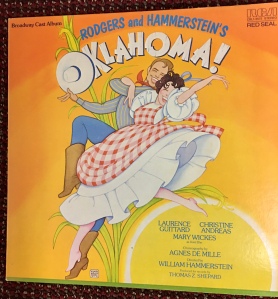 I never knew music could be so wonderful.  I was swept away.  Suddenly music was more than a song.  It made me want to dance, spread my arms wide, and sing out loud.  It had feeling.  It opened the whole world wide.

Thank you, Rodgers and Hammerstein.  They brought to music what Charles Dickens brought to literature – real people, and a sense of understanding.

Many weekends I spent with my good friend Kirk, who also loved musicals.  We played Rodgers and Hammerstein record albums, dressed up in costumes, and became part of the story.  We sang with abandon.  This would become an important part of my teaching later on – bringing heart and soul into music, and eventually into reading aloud.

I vividly remember The King and I, and also South Pacific. 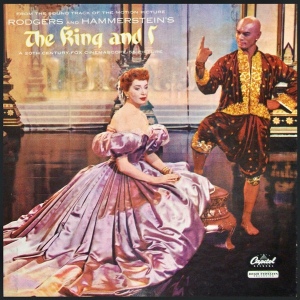 Like Oklahoma, I saw the stage performances.  Now, I was latching onto specific songs as if they were a lifeline.  “Shall We Dance” and “Whistle a Happy Tune” were powerful songs from The King and I.

The tears came with “Some Enchanted Evening” from South Pacific. It ripped at my heart.  An older man and a younger woman, children he had previously fathered – all come into play with this song.  This was my first introduction into an unconventional love relationship.  Rodgers and Hammerstein went even deeper, with a love affair, racial prejudice, and the issue of social consequences.  That was strickly taboo in the early 50’s.  Yet, it was natural and welcoming in the Broadway show.  When young Navy Lieutenant sang “Carefully Taught”, it was my first introduction to diversity and acceptance.  I have never forgotten.

The first time I saw my Mother cry I was fifteen.  Imagine that.  Even after my Father died, she never cried in front of her children.  She was ever strong.  You can grasp the shock when I saw her cry.  Back then, television aired a movie after the 11 o’clock nightly news.  My sister and I stayed up to watch the movie, Carousel.  Mother must have heard it and came downstairs to join us.  Apparently she had seen the Broadway show and loved it.

The end of the movie is high school graduation.  Bad Billy Bigelow, who was killed in a fight and left behind a young woman he loved and their daughter, is allowed to leave heaven and visit his daughter at her graduation.  He sings to her “You’ll Never Walk Alone.”  My Mother cried.  I cried.  My sister cried.  To this day, this is the song.  It’s more than the tears; it’s ‘Life 101’.

The Sound of Music is probably the most well known and popular of Rodgers and Hammerstein’s musicals, and rightfully so.  It is music and a storyline that everyone loves and remembers.  Most people grew up on this movie.  I’m lucky to have grown up on so many more.

Fast forward to today.  Rodgers and Hammerstein did more to teach me about the world, people, relationships, life and death, and right and wrong.  It was the story they told, and of course the music.

I wasn’t a strong reader, so these were often my ‘books’.  When I began teaching, music became an important part of what I did with children.  Not the children’s songs that teachers teach, but real music, from classical to Broadway to soul – the real stuff.  Oh, it has made a big impact.

It was only natural that the passion for telling all the stories Rodgers and Hammerstein told transitioned to my reading aloud.  I grabbed every good book and read it to children in the same way their music did.  I stand, cry, sing, cheer…it’s a long list.  It’s what I do to make books come alive for children.

Thank you, Rodgers and Hammerstein.  You gave me my roots.

I have been teaching preschool for over thirty years. This is my passion. I believe that children have a voice, and that is the catalyst to enhance or even change the learning experience. Emergent curriculum opens young minds. It's the little things that happen in the classroom that are most important and exciting. That's what I write about. I am highlighted in the the new edition of Jim Trelease's bestselling book, "The Read-Aloud Handbook" because of my reading to children. My class has designed quilts that hang as permanent displays at both the National Liberty Museum in Philadelphia, and the Fisher House at the Boston VA Hospital.
View all posts by Jennie →
This entry was posted in Death and dying, Diversity, Expressing words and feelings, Inspiration, music, Singing, The Arts and tagged Broadway musicals, Carousel, Inspiration, music, Oklahoma, Rodgers and Hammerstein, South Pacific, The King and I, the power of music, The Sound of Music. Bookmark the permalink.

80 Responses to Rodgers and Hammerstein, My Mother, and Me