When Teachers Tell Their Stories – Part 6

In Part 5, children were connecting words to other stories.  Their language and critical, divergent thinking was expanding.  I told another Jennie Story that had plenty of excitement, “The Spider Story.”

Part 6
Turning off the lights when telling a story is an attention grabber.  When that story is about Halloween, all the better.  This story also has a lesson, adding to the importance of storytelling. 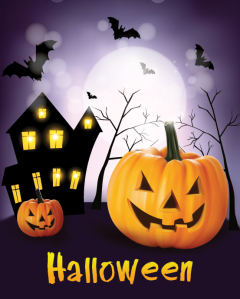 Mrs. Crotty!  She was old and mean.  She never smiled.  Her house was always dark.  Even the bricks on her house were dark.  And, the bushes and trees were enormous and grew all over.  I never saw a light in her house.  It smelled old and funny.  She did, too.  I did not want to go trick-or-treating at Mrs. Crotty’s.

I didn’t say anything and my sister and I headed off all over the neighborhood.  We had so much fun and stayed out until it was very dark.  When we got home we spread our candy out.  I gave my sister the Tootsie Roll Pops and she gave me the Reese’s peanut butter cups.  We were having a great time.  Then my Mother said, “Jennie, did you go trick-or-treating at Mrs. Crotty’s house?”  I looked down and didn’t say anything.  She said, “Take your sister and go, now.”

This was bad.  I was scared.

I took my sister’s hand and we walked to the house.  By now, trick-or-treat was over, and there were no lights on at any house.  The whole neighborhood was pitch black.  Of course Mrs. Crotty’s house was the scariest of all.  We walked up to her dark porch.  It was the longest walk, ever.  I was squeezing my sister’s hand so hard.  I was sure my heart pounding was visible.

“Sarah, you knock on the door.”

So, I swallowed hard, held my breath, and knocked on the door with my heart pounding.  Then, there was a creak of the door.  Just as we were ready to run away the lights came on, and Mrs. Crotty was there.  She was smiling!  She said, “Hi Jennie and Sarah.  Wait right there.  I have something for you.”  She went to the kitchen and brought back each of us a huge popcorn ball, warm and covered with caramel and butter.  She wasn’t even scary!”

And the moral of this story for children?  Face your fears.  You can be brave.  Scary things might not be so scary after all.  The lessons learned here are not direct.  There are no words in the story that say, “Be brave.”  I call this the indirect approach, which is far more powerful.  Children have to reason and come to that conclusion on their own.  I think that in itself is why the story is a popular one, packed into Halloween.

Stay tuned for Part 7.  It’s not for the shy and the weak.

I have been teaching preschool for over thirty years. This is my passion. I believe that children have a voice, and that is the catalyst to enhance or even change the learning experience. Emergent curriculum opens young minds. It's the little things that happen in the classroom that are most important and exciting. That's what I write about. I am highlighted in the the new edition of Jim Trelease's bestselling book, "The Read-Aloud Handbook" because of my reading to children. My class has designed quilts that hang as permanent displays at both the National Liberty Museum in Philadelphia, and the Fisher House at the Boston VA Hospital.
View all posts by Jennie →
This entry was posted in behavior, Early Education, Expressing words and feelings, Halloween, Imagination, preschool, storytelling, Teaching young children and tagged Facing your fears, Jennie stories, language and literacy, preschool, Scary stories, storytelling, The Halloween Story, The moral of the story, Treaching young children. Bookmark the permalink.

75 Responses to When Teachers Tell Their Stories – Part 6