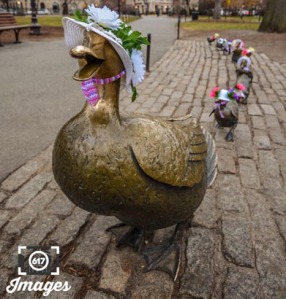 Robert McCloskey’s classic story, Make Way for Ducklings, is immortalized in bronze statues in the Public Garden on Boston Common.  Mrs. Mallard and her eight ducklings, Jack, Kack, Lack, Mack, Nack, Ouack, Pack, and Quack  are all decked out and dressed in their fancy bonnets, ready for Easter.

This classic children’s book was written in 1941 and received the coveted Caldecott Medal in 1942.  The story, based in Boston, is about two ducks, Mr. and Mrs. Mallard, and their journey to find a proper home and start a family.  After the ducklings hatch, there are adventures throughout the city and help from a friendly policeman named Michael. 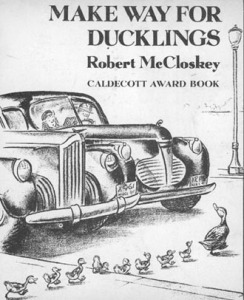 Make Way for Ducklings has been continuously in print since it was first published.  As of 2003, the book had sold over two million copies.  The city of Boston has whole-heartedly embraced the story.  In the Public Garden where the Mallards eventually settled, the bronze statues of Mrs. Mallard and her ducklings by artist Nancy Schön was erected in 1987 – a tribute to Robert McCloskey.

Happy Easter from the Bronze Ducklings at the Public Garden in Boston.

I have been teaching preschool for over thirty years. This is my passion. I believe that children have a voice, and that is the catalyst to enhance or even change the learning experience. Emergent curriculum opens young minds. It's the little things that happen in the classroom that are most important and exciting. That's what I write about. I am highlighted in the the new edition of Jim Trelease's bestselling book, "The Read-Aloud Handbook" because of my reading to children. My class has designed quilts that hang as permanent displays at both the National Liberty Museum in Philadelphia, and the Fisher House at the Boston VA Hospital.
View all posts by Jennie →
This entry was posted in Book Review, books, children's books, Early Education, picture books, reading and tagged Boston Common, Boston Public Garden, children's books, classic children's books, Easter, Make Way for Ducklings, reading, Robert McCloskey. Bookmark the permalink.