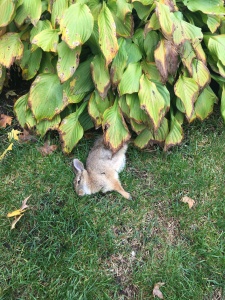 Vivian was wide-eyed and worried.  I knew this was serious.  I sprinted with her over to the bushes and around to the backside.  There lay a bunny.  It looked to be sleeping and very peaceful.

Vivian didn’t know what to say.  By now, other children were curious and coming over to see.  Another teacher thought I should take the children away from the scene.  After all, it was a dead animal.

I did just the opposite.

I called all the children over to see.  It’s okay to see death.  Children needed to see, to ask questions, and to be there.  It was up to me to guide the situation and open a discussion. First we looked at the fur and talked about how lucky we were to be up close and see how truly beautiful bunnies are.

“How many different colors do you see?  Did you know a bunny’s tummy is white?  Look at the white under his neck.”

And then the real questions began:

“Why did the bunny die?”
“The bunny was probably old.  He doesn’t look like a baby bunny, does he?”

The bunny was close to our Memory Garden, so we walked over and read the names of class pets who had died, painted on rocks by the children.

It doesn’t take a dead bunny on the playground to talk about death and dying. It can happen with a really good book.  I know, because a few months later, I discovered The Rough Patch by Brian Lies.  While there have been many children’s books over the years to address this subject, few have hit the heart with a golden arrow.  The Rough Patch does just that.  The book just received the Caldecott Honor Award.  Yes, it’s that good.

Evan’s best friend and beloved dog dies.  In the most poignant writing when the dog dies, the author writes, “But one day, the unthinkable happened.”  When I read those words to the children, they were silent and wide-eyed.  Their faces showed worry.  They needed to talk.  And we did.  We talked about our pets who died, and our grandparents who died – like we did when the bunny died.  We talked about how that makes us feel, because Evan was angry.  Children get angry, they get sad, too.  They need to know it’s okay to feel that way.  They need to talk.

And that’s what we do with a good book.

In The Rough Patch, the rich, brilliant illustrations complement the text (no wonder it won a Caldecott).  There is a page in the book, perfectally illustrated, when Evan suddenly realizes what he has done to his garden after being angry.  He has hacked it down, the one thing he and his dog enjoyed together.  Evan’s eyes in the illustration speak many words.  They seem to find a pathway to the heart, and open the door for children to speak, and ask questions, or get a hug.

Death can make a child feel angry.  Go and grab this book.  It is a warm blanket.

I have been teaching preschool for over thirty years. This is my passion. I believe that children have a voice, and that is the catalyst to enhance or even change the learning experience. Emergent curriculum opens young minds. It's the little things that happen in the classroom that are most important and exciting. That's what I write about. I am highlighted in the the new edition of Jim Trelease's bestselling book, "The Read-Aloud Handbook" because of my reading to children. My class has designed quilts that hang as permanent displays at both the National Liberty Museum in Philadelphia, and the Fisher House at the Boston VA Hospital.
View all posts by Jennie →
This entry was posted in behavior, Death and dying, Early Education, Expressing words and feelings, Nature, preschool, Teaching young children and tagged Death and dying, emergent curriculum, literacy, picture books, reading books to children, Teaching death and dying, teaching young children, The Rough Patch by Brian Lies. Bookmark the permalink.

92 Responses to Talking Death and Dying with Children – Part 1