From “The Three Billy Goats Gruff” to Dr. Seuss

This week began with National Fairy Tale Day and ended with Dr. Seuss’s birthday.  I was in my glory.  So were the children.

We voted on our favorite fairy tale.  The Three Billy Goats Gruff won, hands-down.  This was a bit of a surprise to me, as Jack and the Beanstalk usually wins.  Never a dull moment with children.  Always a delightful surprise. 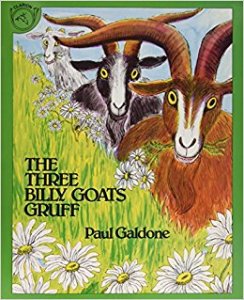 This is my version of the book, well worn from decades of reading aloud.  After two days of reading, the children were not ready to let it go.  That speaks volumes for fairy tales, in general.  By the second reading, children had memorized key phrases like “I’m going to gobble you up.”  They delighted in reciting the words of the troll, “Be off with you”, in unison.  This was accompanied by fifteen dramatic, sweeping arms pointing to the billy goats.  So much fun!

By the next day, I sensed the children both wanted and needed more.  What better than an impromptu play performance!  Thirty minutes of picking parts, arranging the classroom, and practicing was all we needed.  After all, they practically knew the story by heart.  I rushed down to the Pre-K class and invited them to be our audience.  Many of those children were in my class last year.  Here is a video clip of the play performance:

Fairy Tales – I can’t recall other children’s books that have withstood the test of time and remained at the top of their ‘favorites’ list.

The end of the week brought the birthday of Dr. Seuss.  His books are beloved classics.  I often read them to the children.  My favorite is Green Eggs and Ham.

It was the breakthrough book when my own children learned to read.  All those wonderful rhyming words, blending sounds and syllables, along with a fun, quirky story and characters, was perfect.  My children loved this book.  It taught them how to read.

I have another strong memory of Green Eggs and Ham.  An old television show I watched way back then was Saint Elsewhere.  It was a hospital show, a drama with well developed plots and characters.  The head doctor, or head of the hospital, was a wiry, mean, self-centered man.  He was a workaholic and was hated by the staff and doctors.  The end of one episode is the finale of this man’s son dying.  The son, Sam, committed suicide and left his father a note.  As the father reads the note aloud, Sam is recalling his fondest memory, the times they would read Green Eggs and Ham together, and laugh at Sam-I-am, which became Sam’s nickname.  Sam signed the note, “I loved that, Dad.  Love, Sam-I-am.”  Well, the doctor melted in tears (so did I) and of course realized all he had missed and what he had become.  A powerful message.

Thank you, Dr. Seuss, for all you have given to children and their families.  Happy Birthday!

I have been teaching preschool for over thirty years. This is my passion. I believe that children have a voice, and that is the catalyst to enhance or even change the learning experience. Emergent curriculum opens young minds. It's the little things that happen in the classroom that are most important and exciting. That's what I write about. I am highlighted in the the new edition of Jim Trelease's bestselling book, "The Read-Aloud Handbook" because of my reading to children. My class has designed quilts that hang as permanent displays at both the National Liberty Museum in Philadelphia, and the Fisher House at the Boston VA Hospital.
View all posts by Jennie →
This entry was posted in books, children's books, Early Education, Expressing words and feelings, Inspiration, picture books, reading, reading aloud, reading aloud, Teaching young children and tagged children's books, Dr. Seuss, Early Education, Fairy Tales, Green Eggs and Ham, Play performance, preschool, reading aloud, teaching young children, The Three Billy Goats Gruff. Bookmark the permalink.

69 Responses to From “The Three Billy Goats Gruff” to Dr. Seuss