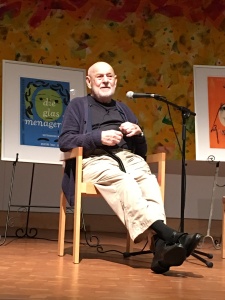 My author bucket list started to grow when Peter Spier died this year.  His Star-Spangled Banner, Circus, and Rain books have been staples in my classroom for decades. I always meant to write and tell him so…  His death was my wake-up call.

And then I learned that Eric Carle would be speaking with Annie Lionni, granddaughter of Leo Lionni.

Woah!  Leo Lionni, as in Swimmy, the first book I ever read aloud in my classroom.  The book that changed my life in teaching. 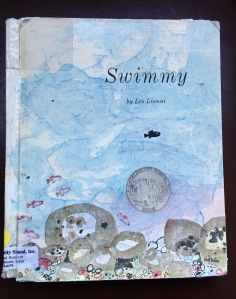 I think you get the picture.

In order to understand this event, here is the back story, well my back story:

I have been reading Eric Carle’s books to children for over thirty years. The Very Hungry Caterpillar is a classic.  So is Brown Bear, Brown Bear.  The list of his books I have read aloud is a long one.  Then fifteen years ago the Eric Carle Museum opened, a museum dedicated to the art of children’s book illustrators.  Oh yes, I have seen their exhibits which have displayed the original art of Madeline and Make Way For Ducklings (just for starters), beloved books I’ve read hundreds of times.  There’s a long list of art illustrations displayed at the museum, and it’s a good list.

When visiting the museum, I learned about Eric Carle’s life.  He was born in Germany, came to the U.S., and then returned to Germany with his family in the 1930’s.  Not a good time in history to be in Germany.  He was shown “forbidden art” by his art teacher- the art of Monet, Picasso, Matisse, and Kandinsky.  That changed his life in art.  It changed my passion in teaching art to children, too.

Then after the war, Eric Carle came to America when he was in his 20’s.  That is where the event last week with Annie Lionni begins: 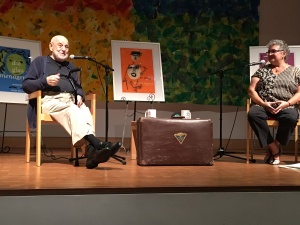 The brown suitcase on stage is what he had when he arrived in New York City, filled with advertising posters he had done for theaters.  And so began a conversation of fascinating stories, told with wit and humor, along with Annie Lionni.  The audience was captivated hearing this man speak.  I was front row center, the 50-yard line, right behind home plate.

When Eric Carle arrived in New York City, he saw a copy of Fortune magazine, was struck by the art on the cover, and noticed the signed name at the bottom: Leo Lionni.

“I went to a pay phone booth and looked up his name in the phone book.  I telephoned and Leo actually answered the phone.  He said he would be happy to meet me and gave me directions.  Can you imagine my luck?”

Leo Lionni gave Eric Carle his first job.  It was art for advertising.  Children’s books weren’t on the radar for either man until many years later.  Time went by, and Eric Carle was in New York and called Leo Lionni to get together.  This is the story he told Annie, on stage:

“I called Leo and asked if he could meet me on Tuesday.  “No, I cannot on Tuesday”, he said.  “How about Wednesday?”, l asked.  “No, I cannot”, he said.  “Can you meet me on Thursday?”, I asked.  Leo replied, “No, I cannot.”  I was hurt.  I was deeply hurt.  I did not understand why.  Years later when Leo was close to dying a friend called me and said I should go and see him.  I still had so much hurt inside.  I did not go and see him.  What I did not know at the time back then, was that his son had died.  That is my only regret in life, that I did not see Leo again.”

Every story was delightful and engaging.  The audience and Eric Carle and Annie Leonni were one.

Afterwords in the lobby I was asked if I would like to meet Carle (gulp!)  I thanked him and told him what a difference he has made in my classroom- in both children’s books and art.  I told him that his discovery and love of modern “forbidden” art has inspired me to really teach art to children and learn about artists, like Eric Carle.  He smiled and nodded with understanding.

I have been teaching preschool for over thirty years. This is my passion. I believe that children have a voice, and that is the catalyst to enhance or even change the learning experience. Emergent curriculum opens young minds. It's the little things that happen in the classroom that are most important and exciting. That's what I write about. I am highlighted in the the new edition of Jim Trelease's bestselling book, "The Read-Aloud Handbook" because of my reading to children. My class has designed quilts that hang as permanent displays at both the National Liberty Museum in Philadelphia, and the Fisher House at the Boston VA Hospital.
View all posts by Jennie →
This entry was posted in art, Author interview, Early Education, Eric Carle, Leo Lionni, museums, picture books, storytelling, Teaching young children and tagged art, children's book illustrations, children's books, Early Education, Eric Carle, Leo Lionni, teaching young children. Bookmark the permalink.

73 Responses to Meeting an Author