Picasso, My Grandmother, and Me

My grandmother, Nan, has been my hero since I was a little girl.  I spent Sunday afternoons with her, and it was delightful.  No, it was more than that.  Nan filled me with stories, taffy pulls, and dressing-up.  She drove me and my sister in to Kresge’s, the five-and-dime, to spend a whole nickle on anything we wanted.  Sundays with Nan were the best.

Nan lived in an apartment.  When you entered, the first thing hanging on the wall was a Picasso, “Girl Before a Mirror”.  I remember thinking how funny the painting looked and having many conversations with Nan. While this became familiar to me in her apartment, so did other art.  Gilbert Gaul’s “Leaving Home” was my favorite, opening my eyes to art that tells a story with the scene and characters.  This painting was was about history and the Civil War.  I’ve been a history buff ever since.

I recently came face-to-face with a Picasso at the Currier Museum of Art in Manchester, NH.  Nan came flooding over me. 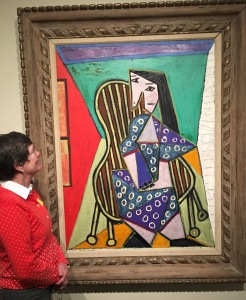 The Currier interpreted the painting:

Picasso executed this painting during World War II while living in a small apartment in German-occupied Paris.  While the distortion of form and space through simplified shapes reflect Picasso’s earlier Cubist period, the bright color and emotional charge is the continuing influence of Expressionist art.

Emotionally charged, indeed.  This was real.  I crept close and looked at brush strokes.  The white circles on the woman’s dress are thick, raised paint.  I thought about Picasso painting this, perhaps looking out his window at the Germans in the streets of Paris and feeling angry.

And, I thought about Nan.  She was only five years older than Picasso.  How did she come to like Picasso art?  After all, his painting greeted everyone who entered her home.  But, Nan’s life was far from modern.  She grew up in rural West Virginia, in the oldest two-story log house west of the Appalachian mountains.  She was more akin to Laura Ingalls Wilder than to Pablo Picasso.  She had a hard life, outliving her brothers and sisters, two husbands, and her children.  By the time I came along, all she had were her grandchildren.  Yet, she was ever happy and strong.

I teach art to my preschool class in a way that admires and respects the art of well-known artists.  Learning from greatness is a good beginning.  Young children are enthusiastic sponges when it comes to art, and I introduce many styles of painting.  Real is best, therefore children paint with authentic watercolor paints squeezed from tubes onto a palette.  Each April we host an Art Show for the community.  Children paint in the style of Picasso, Kandinsky, Monet, van Gogh, Matisse, Carle, and others. 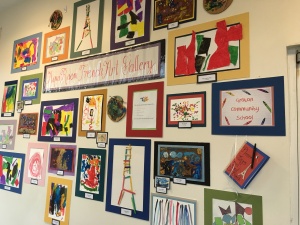 I have been teaching preschool for over thirty years. This is my passion. I believe that children have a voice, and that is the catalyst to enhance or even change the learning experience. Emergent curriculum opens young minds. It's the little things that happen in the classroom that are most important and exciting. That's what I write about. I am highlighted in the the new edition of Jim Trelease's bestselling book, "The Read-Aloud Handbook" because of my reading to children. My class has designed quilts that hang as permanent displays at both the National Liberty Museum in Philadelphia, and the Fisher House at the Boston VA Hospital.
View all posts by Jennie →
This entry was posted in art, Early Education, Teaching young children and tagged Art museums, Currier Museum of Art, grandmothers, Pablo Picasso, teaching art to children. Bookmark the permalink.

62 Responses to Picasso, My Grandmother, and Me