Over the past two years children in my class have loved Boston Dynamics’ robots.  Well, that’s actually an understatement.  Children have been over the moon, and they have embraced every video from dancing to technology.

A new year just began.  Robots had not come into play… until a random question.

Nap time was over.  Sadie was a sleepyhead.  I knew we needed to play one of our wake-up songs.  We have three, and each one couldn’t be more different:

“What song should we play to wake up Sadie?”

The crowd spoke, loud and clear: “The Robot Song!”  Okay, the crowd was mostly children who were in the class last year.  As soon as we played the video to wake up Sadie, all the other children – the newcomers – were thrilled.  They danced.  They practiced all the robot moves.  They were hooked.

Sadie woke up.  But, the children wanted more.  We sang and danced, and we watched videos of the robots learning to do hard things.  On the playground that afternoon a child noticed the T-shirt of a classmate and said, “Look, that’s Atlas!”  By golly, he was right.  It looked just like Atlas the robot. 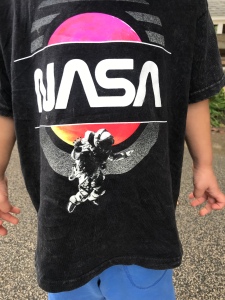 It wasn’t enough.  I knew.  The next day we wrote a letter to Boston Dynamics.

A parent said, “So, who is Atlas?  My daughter keeps talking about Atlas.”  These are the questions that are music to my ears.  As much as we like the robots singing and dancing, we watch videos of Atlas walking through snow, climbing, falling down, doing front rolls, and lifting heavy objects.  Children ask questions.  They are glued to watching Atlas.

Because children love robots, and they’re naturally curious,  it’s a win-win for STEM (Science, Technology, Engineering, Math) and the next generation of scientists, technicians, engineers, and mathematicians.  Thanks to Boston Dynamics, I’m growing them in my classroom.

I have been teaching preschool for over thirty years. This is my passion. I believe that children have a voice, and that is the catalyst to enhance or even change the learning experience. Emergent curriculum opens young minds. It's the little things that happen in the classroom that are most important and exciting. That's what I write about. I am highlighted in the the new edition of Jim Trelease's bestselling book, "The Read-Aloud Handbook" because of my reading to children. My class has designed quilts that hang as permanent displays at both the National Liberty Museum in Philadelphia, and the Fisher House at the Boston VA Hospital.
View all posts by Jennie →
This entry was posted in behavior, Diversity, Early Education, Expressing words and feelings, Inspiration, preschool, Teaching young children and tagged Boston Dynamics, Boston Dynamics Robots, Pata Pata, Reveille, robots. Bookmark the permalink.