In Part 4 the Peace Quilt became part of the permanent collection at the National Liberty Museum in Philadelphia, and Milly became an important part of my classroom.  Children adored her.  She loved singing, and Milly’s favorite song was our favorite song, too – “God Bless America.”

“Jennie, can we sing again?  Can we sing “God Bless America?”  This was what I heard from children, every day.  I sing many songs with children, all kinds of songs.  So, why was this particular song the favorite?  I don’t know.  But, what I do know is to pay attention to children and what they gravitate towards.  My lesson plans might be terrific, but I know intuitively that what children are drawn to, is far more important.  I paid attention.  And it grew.  When children were in the playground they started singing on their own for other children.  They sang all the time for Milly.  She joined in, and she loved it!

I had to do more, because the children wanted, needed, more.  Veterans Day arrived and we invited soldiers into the classroom to say Thank You, and of course to sing. 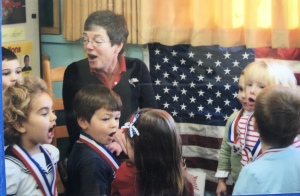 Milly spent time at school making a red, white, and blue outfit for Gloria- at the request of children.

When the holidays were approaching, I had this pit in my stomach.  I just felt like I was giving hungry children little bits of food instead of a big meal.  So, I decided we would make a God Bless America book for families as a holiday gift.  This would be our own version, based on Lizzie’s favorite book.  What a treasure this book became! 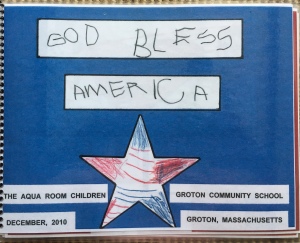 We wrote all the words and made our own illustrations.

I didn’t know it at the time, but this book would have a profound influence and effect later on.  But, I’m getting ahead of myself…

When the holidays were over and we were back to school, things really hadn’t changed.  Children built a ‘hill’ in the snow as ‘their’ stage to sing.  They were often on the soccer bench at the far end of the playground.  I could hear their voices raised in song.  Everybody could.

Jennie, the children are trying to tell you they want more.  Pay attention.  Do something!  I called Milly.

“Milly, do you think you could make another quilt with the children?”  That was like asking a child if they wanted candy.

“I was hoping you would say that.”

And so, we began another quilting adventure.  We already knew what we wanted to have on the quilt, as we had memorized the song – singing it a zillion times will do that.  We had also made our book that illustrated all those words.  But, we needed to put everything into one picture for the quilt.

Again, children made all the decisions as to what would go where.  Milly was there to watch.  They colored the big sketch, which reinforced the words to the song, and reinforced what they wanted.  It was their ‘statement’ and they were proud. 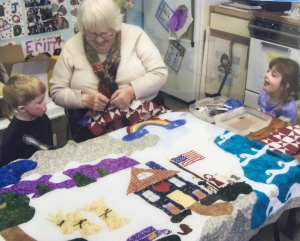 Look at Milly’s big smile!  Children couldn’t get enough of picking fabrics and watching everything come to life.  Look carefully at the quilt:

I didn’t notice it at first.  Do you see the large white center?  That’s the United States of America.  In New York, there is the child’s Statue of Liberty.  There’s “night” and the “light from above”, “mountains” and “prairies” and “ocean”, and of course “home sweet home”.  I wish you could see this in the flesh.

The newspaper wanted to do an article, and the Post Office wanted us to hang the quilt for ‘the world’ to see. 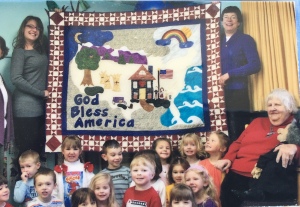 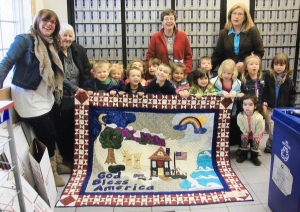 Milly was now quite well known!

“Jennie, where will the quilt go?”  People were starting to ask.  The Postmaster wanted to know.  Our school’s director wanted to know.  Milly hadn’t asked me…yet.  And then it came to me.  The quilt was museum-worthy, much like the Peace Quilt.  But, I wrestled with what museum would be best and most appropriate.  My first thought was the song, “God Bless America”, and I researched Irving Berlin and museums where much of his memorabilia is located.

An interesting fact about the song: Irving Berlin thought “The Star-Spangled Banner” was too difficult.  He was not a big fan of the song, especially as our National Anthem.  That prompted him to write “God Bless America.”

The museums, while wonderful, felt limited in the sense that our quilt was about far more than Irving Berlin.  It was more about patriotism.  Patriotism.  I had hit the nail on the head in defining the quilt and where it needed to be.

My husband immediately said, “Jennie, the most patriotic museum is in New York City.  It’s a restored aircraft carrier, the USS Intrepid.”  Why did I not know this?!  I researched the museum (perfect fit) and immediately contacted the director, the ‘top dog’.  To my surprise she got back to me right away.  Boy, was she excited!  So, we were off – again – with families and children in tow.  Milly’s family made the trip, too.  The event was far more than I expected… and it took a major turn.  Stay tuned for Part 6.

I have been teaching preschool for over thirty years. This is my passion. I believe that children have a voice, and that is the catalyst to enhance or even change the learning experience. Emergent curriculum opens young minds. It's the little things that happen in the classroom that are most important and exciting. That's what I write about. I am highlighted in the the new edition of Jim Trelease's bestselling book, "The Read-Aloud Handbook" because of my reading to children. My class has designed quilts that hang as permanent displays at both the National Liberty Museum in Philadelphia, and the Fisher House at the Boston VA Hospital.
View all posts by Jennie →
This entry was posted in America, art, geography, Giving thanks, Gloria, Inspiration, joy, museums, patriotism, quilting, School, Teaching young children, The Arts and tagged "God Bless America", Inspiration, Intrepid Museum, Milly the Quilter, patriotism, quilting, teaching young children. Bookmark the permalink.