Humpty Dumpty – What Happened After His Fall?

So, what  really happened to Humpty after his fall? 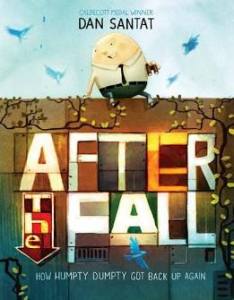 “After the Fall” by Dan Santat tells the story.  It is one of the most innovative children’s picture books ever.  Humpty is ‘mended’… but not really. 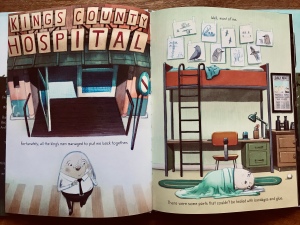 “There were some parts that couldn’t be healed with bandages and glue.”

This is the beginning of the story, and children are immediately captivated.  Is it because of Humpty Dumpty?  No.  He is a character they know, yet it’s the words and illustrations on this page that make children think, “I feel that way sometimes.”

See that ladder?  It is throughout the book; ‘there’ and an obstacle in many everyday things he wants to do.

As the book goes on, Humpty cannot climb up.  The ladder to his wall is looming.  He just can’t do it, and he misses out on many things, like being high above the city and watching the birds.  He loves the birds.

An idea flew by.  If he can’t be up there with the birds, he can make his own.  And so Humpty puts all his energy into making a paper plane bird.

“Making paper planes was harder than I thought.
It was easy to get cuts and scratches.
But day after day, I kept trying…
…and trying…”

This is where children begin to cheer Humpty.  He has survived a fall, realized that he cannot climb a ladder, and tries to do something else to make himself happy.  Humpty is moving forward.  But the worst is yet to happen.  He perfects his paper plane bird.  It is marvelous.  One day it lands on top of the wall – his wall.

I stop reading and let children look at this powerful illustration.  We talk.  Oh, how we talk.  The floodgates of all that has happened to Humpty open their doors.  Children need to talk about being scared and worried, and messing up.  They understand Humpty.  More importantly, they are relieved they’re not alone.

What does Humpty do?  His beloved paper plane bird has landed on top of the wall – his wall.  He decides to climb that ladder.  This is the bravest thing he has ever done, and Humpty is terrified. 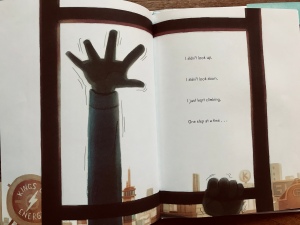 Humpty makes it to the top.  “Until I was no longer afraid” are his words.  We stop and take a deep breath.  Whew!  The conversations flow.  Being afraid is one thing, overcoming that fear is another.  Humpty Dumpty is an egg.  Eggs hatch, and Humpty hatched after he overcame his fear and climbed that ladder.

A most important life lesson is in this book.  Resiliency.  Children need good stories and role models to help them develop this skill.  Humpty Dumpty is a role model.  “After the Fall” is an outstanding book.

I have been teaching preschool for over thirty years. This is my passion. I believe that children have a voice, and that is the catalyst to enhance or even change the learning experience. Emergent curriculum opens young minds. It's the little things that happen in the classroom that are most important and exciting. That's what I write about. I am highlighted in the the new edition of Jim Trelease's bestselling book, "The Read-Aloud Handbook" because of my reading to children. My class has designed quilts that hang as permanent displays at both the National Liberty Museum in Philadelphia, and the Fisher House at the Boston VA Hospital.
View all posts by Jennie →
This entry was posted in Book Review, children's books, Early Education, Expressing words and feelings, Inspiration, picture books, preschool, reading aloud, reading aloud, self esteem and tagged After the Fall by Dan Santat, Book Review, children's books, Humpty Dumpty, Inspiration, literacy, Overcoming fear, reading books to children, resiliency. Bookmark the permalink.

65 Responses to Humpty Dumpty – What Happened After His Fall?