My favorite photo is Mac and his Dad, reading “Charlotte’s Web”. Pete used this photo to write an endearing story of love, spiders, reading aloud… and a teacher named Jennie. Thank you, Pete. 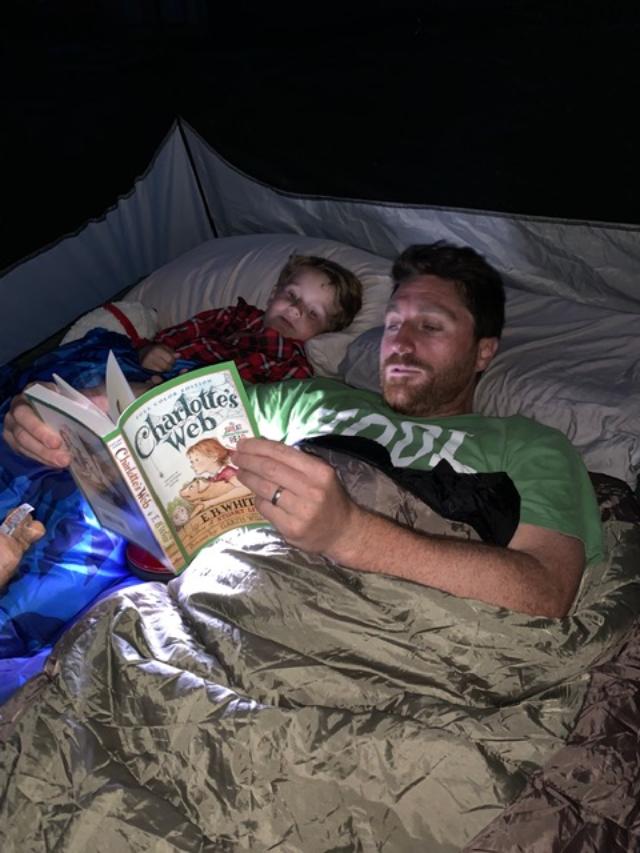 This is a short story, in 940 words.
It was prompted by the above photo, sent to me by Jennie Fitzkee.
https://jenniefitzkee.com/

It wasn’t Scott’s fault, but he couldn’t be home much when Taylor was little. First it was Afghanistan, then a posting to Africa. He hardly saw his son grow from the little baby he left behind, and the home leave was too short for them to bond properly. Sometimes, Scott had to fight back the tears. There were other times too. Times when he thought about leaving the army, and finding a job close to home.

Leigh was his rock though. A wonderful wife, and a fantastic mother. She talked him out of quitting the army that she knew he loved, and promised him everything would be alright. “It’ll be okay, honey. I will explain things to Taylor. He’s growing fast now, and he will understand soon. Then…

I have been teaching preschool for over thirty years. This is my passion. I believe that children have a voice, and that is the catalyst to enhance or even change the learning experience. Emergent curriculum opens young minds. It's the little things that happen in the classroom that are most important and exciting. That's what I write about. I am highlighted in the the new edition of Jim Trelease's bestselling book, "The Read-Aloud Handbook" because of my reading to children. My class has designed quilts that hang as permanent displays at both the National Liberty Museum in Philadelphia, and the Fisher House at the Boston VA Hospital.
View all posts by Jennie →
This entry was posted in Uncategorized. Bookmark the permalink.