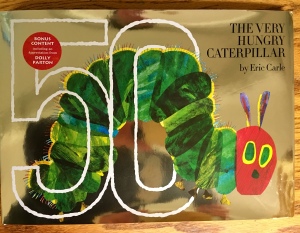 Fifty years.  That’s a very long time.  For a book to still be alive, vibrant, and read all over the world – fifty years later – is astounding.  The Very Hungry Caterpillar by Eric Carle is celebrating it’s 50th anniversary this year, with a golden book jacket.

The caterpillar in the story wasn’t always a caterpillar.  Initially it was a worm, and the book was titled A Week With Willi the Worm. 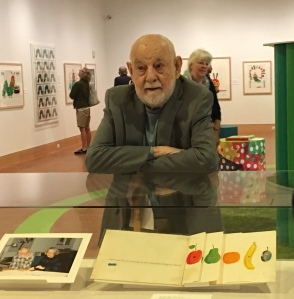 The editor wasn’t crazy about a worm.  When she suggested a caterpillar, Carle immediately said butterfly, and the story was born.  The favorite part of the book for children, also a nightmare for the publisher, is the five pages of fruit for each weekday – with a hole through the fruit.  Carle’s inspiration came from using a holepunch at work.

“On Monday he ate through one apple.  But he was still hungry.”
(The page with one apple is narrow- only 2 inches.)

“On Tuesday he ate through two pears, but he was still hungry.”
(The page with two pears is 4 inches.)

And so on, through Friday.  Children love chanting the repeating phrase,
“…but he was still hungry”. 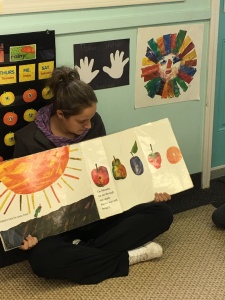 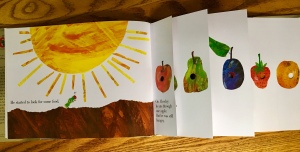 Today the book has been translated in sixty-two languages and has sold more than forty-six million copies.  More than one copy of the book is sold every minute.  Those statistics are mind boggling.  Why is the book so successful?  The illustrations are beautiful, especially the butterfly.  The text is predictable, yet exciting.  The story is really about life – being born, learning along the way with mistakes, right and wrong, and also the wonder of what happens when we emerge into the person we want to be.  Isn’t that what children want to hear about?  Aren’t those the important things?  That’s what we need to read to children.

Eric Carle says the story is one of hope.  “Like the caterpillar, children will grow up and spread their wings.”

The youngest of children enjoy the story, and so do older children.  If you haven’t read the book in a while, I highly recommend it. 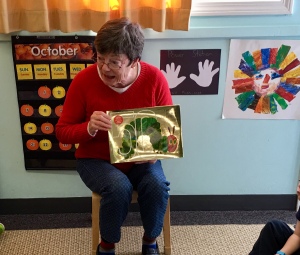 I have been teaching preschool for over thirty years. This is my passion. I believe that children have a voice, and that is the catalyst to enhance or even change the learning experience. Emergent curriculum opens young minds. It's the little things that happen in the classroom that are most important and exciting. That's what I write about. I am highlighted in the the new edition of Jim Trelease's bestselling book, "The Read-Aloud Handbook" because of my reading to children. My class has designed quilts that hang as permanent displays at both the National Liberty Museum in Philadelphia, and the Fisher House at the Boston VA Hospital.
View all posts by Jennie →
This entry was posted in Book Review, books, children's books, Early Education, Eric Carle, history, picture books, preschool, reading aloud, reading aloud, The Arts and tagged children's books, Eric Carle, picture books, Reading to children, The Very Hungry Caterpillar, The Very Hungry Caterpillar turns 50. Bookmark the permalink.