The Legacy of Milly, Part 9

In Part 8, Milly and the children were guests of honor at the one-year anniversary of the Boston Fisher House.  With a full crowd in attendance, including members of the Fisher family, we presented the God Bless America quilt.  And, a Command (Challenge) Coin was pressed into Milly’s hand.  Shortly thereafter Milly became sick.

The following year Milly made many trips to school, playing with children.  Gloria was always thrilled to see her BFF. 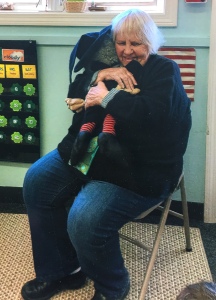 Milly taught the children how to sew, using plastic needles and yarn on cardboard punched with holes.  She was the queen of Go Fish and Bingo.  Every Milly visit was a very good day at school.  Often the children made things for Milly.  We were in the middle of learning about kings and queens, and children wanted to make Milly her own crown. 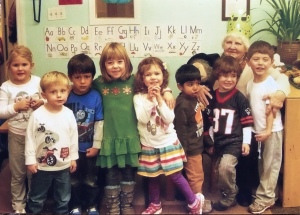 Our director had always wanted a Milly quilt at school.  Well, everyone did.  And so, Milly and the children designed a beautiful quilt that had everything important to the children- our school, the playground, rail trail, library, Johnson’s ice cream, our school’s Peace Pole and dove, on and on.

The quilt took a good part of the school year to make.  Children especially loved picking and adding buttons as windows in the houses.  The following fall the quilt was ready.  It is called “Our Towns.”  We had a lovely celebration at school!  The quilt hangs ‘front and center’ in the main hallway at school. 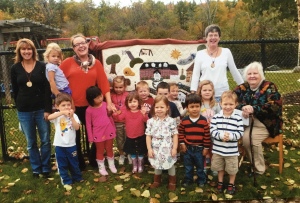 And that year we welcomed a new baby guinea pig, Ella the Fella.  He brought so much love and kindness to the children.  Things started to grow yet again when we learned a new song, “Bells of Peace.”  This song became the hit of the year and continues to be a favorite to this day.  Then there was “From the Seed in the Ground”, another wonderful song.  That school year seemed to be filled with extra joy, giving, and caring.  It felt good.

Peace was creeping in again…

Every May my husband and I take Milly to her favorite restaurant for her birthday dinner.  Milly’s classroom visits had dwindled, as she was now getting dialysis three times a week, and walking was very difficult for her.  Asking her to do more at school was, well, nervy at best.  After a (large) glass of wine, I summoned up my courage.

“Milly, remember the Peace Quilt?  Wasn’t that one of the best?”

So, I just plunged right in and said it.  “The children absolutely love peace.  This past year it has been big.  Really big.  Milly, I want us to make another Peace Quilt.  What do you think?  Can we do this again?”  I think I ordered another glass of wine.

Milly never hesitated.  She said, “I think that would be wonderful.  I’d love to!”

Milly’s first visit in the fall was nothing short of wonderful.  She arrived wearing a costume.  And she gave the costume to Gloria.  That was fun.  And, ‘so Milly’!

Then we went to work!  Children brainstormed their ideas.  Milly had been listening carefully.  The wheels were turning in her head.  Suddenly, she had an epiphany!  It was the best idea of all:

“These images of peace are seen through the eyes of children.  Why not make the quilt showing children and their family looking outside, through a window, at all these images?”

Brillant!  And, just perfect.  This was our sketch:

Three children and their family looking at dancing, reading, playing, the ocean, a new baby, hearts falling from a tree, butterflies…

Milly did her magic with the children.  Every little thing was a work of art.  The little girl’s pony tail was 3-D, the hearts – every one – were puffy and raised, the swings were made with real, tiny chains, the butterfly wings actually flew.  And at every visit the children hovered, watching in fascination, as their ideas came to life.  It was a wonder!

The quilt was finished at last.

But things were far from over.  I bumped into a past parent whose child had been part of the first Peace Quilt.  She knew nothing of the new quilt.  The conversation went something like this:

“Hi, Jennie!  Have you made any more quilts with Milly?  I’ll never forget going to Philadelphia with the Peace Quilt.  We still talk about that.  It was amazing.”

So I told her about Milly and the quilts we had made together.

“Rosanna, we have just made another Peace Quilt!  It is stunning, with children and family looking out a window at Peace.”

“Another one?  Wow!  Jennie, I told you before that the first one needed to go to the White House. That’s really what needs to happen with the new one.  The world needs peace now more than ever.”

And the lightbulb went off!  Oh, did it ever!  I knew where this quilt needed to be.  Not the White House.  Better!  Stayed tuned for Part 10, the grand finalé.

I have been teaching preschool for over thirty years. This is my passion. I believe that children have a voice, and that is the catalyst to enhance or even change the learning experience. Emergent curriculum opens young minds. It's the little things that happen in the classroom that are most important and exciting. That's what I write about. I am highlighted in the the new edition of Jim Trelease's bestselling book, "The Read-Aloud Handbook" because of my reading to children. My class has designed quilts that hang as permanent displays at both the National Liberty Museum in Philadelphia, and the Fisher House at the Boston VA Hospital.
View all posts by Jennie →
This entry was posted in art, Early Education, Gloria, Imagination, Inspiration, Kindness, Love, Peace, quilting, Singing, Teaching young children, The Arts, wonder and tagged Bells of Peace, Imagination, Inspiration, Milly the Quilter, Peace Quilt, quilting, Teaching children. Bookmark the permalink.

58 Responses to The Legacy of Milly, Part 9