The Legacy of Milly, Part 6

In Part 5, the children were over the moon singing “God Bless America” at every opportunity.  We sang for soldiers, and made our own God Bless America book for families, writing and illustrating all the words to the song.  Children still wanted more- I could tell.  Milly to the rescue to make a God Bless America quilt.  The Intrepid Museum in NYC was interested in the quilt! 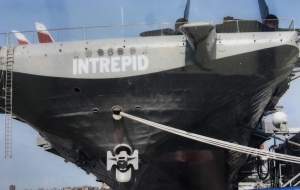 The USS Intrepid was a US Navy aircraft carrier commissioned in WWII and in service through the Vietnam war.  When it was decommissioned in 1974, Zachary Fisher  rescued the ship.  It was restored and opened as a museum in 1982.

I did not know of Zachary Fisher.  He becomes important to the quilt later on.

The children and Milly were treated like kings and queens aboard the Intrepid.  First, we were rescued from the long line by the museum’s Curator and whisked onto the carrier.  We had a personal two-hour tour.  I remember all the old, beautiful brass used throughout the ship, the tight quarters, and displays of Navy memorabilia.  The flight deck is home to many different aircraft.  That part of the ship alone is well worth the visit:

The quilt was put on display in the central part of the ship.  The Curator and other staff were present to see it and give us an official welcome.  The public visited the quilt, oohing and aahing, and asking Milly questions.  And then, the children were asked to sing!  With Milly’s beautiful voice leading the children, “God Bless America” could be heard throughout the ship.  There were school groups who stopped by, excited to see the quilt and ask questions.  I enjoyed asking them to find different parts of the song on the quilt, much like an I Spy.  That was fun! 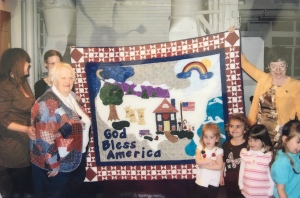 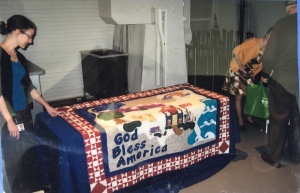 As our visit was nearing an end, Jessica the Curator pulled me aside to have a talk with me.

“Jennie, the quilt is absolutely stunning.  Thank you so much.  Our Executive Board meets the first of each month, and the quilt is on their agenda.  I will be calling you soon.”

“Jennie, I have good news, although not what you imagine.”

“Okay.”  My heart was pounding.

“The Executive Board feels the quilt isn’t the right size for the Intrepid Museum.  Space and hanging will pose a problem.  It’s too large for the very limited wall space on the hanger deck.”

“I understand.”  My heart was sinking.

“They have made a unanimous decision.  Unanimous!  They love the quilt.”

“Okay.”  My heart was soaring.

“Do you know of Zachary Fisher?”

“I believe he was the guy who rescued the USS Intrepid and turned it into a museum.  Right?”

“Right.  But he did much more than that.  He was a philanthropist and a great supporter of the Armed Forces.  He established many different foundations.  One of the biggest and most important is the Fisher House Foundation.  They provide “homes away from home” for families of hospitalized military personnel.”

“Wow.  Like Ronald McDonald houses for families of sick children?”

“Exactly.  The Executive Board wants to donate the quilt to the Fisher House Foundation.  I hope you agree with me and with the Board that this is quite an honor.”

“Of course, Jessica.  And thank you so much.”

So, the God Bless America would take another twist and turn.  Milly thought this was one of the best adventures.  “Jennie, we had a great trip to the Intrepid.  They wanted to see the quilt and have us visit.  And now, there is something new.”  I just love(d) Milly.  First, I received a phone call from the head of the Fisher House Foundation.  Obviously the Intrepid Museum had been in touch.  They’re located in Rockville, Maryland.

We decided it would be appropriate and fun for the children to deliver the quilt themselves to a Fisher House in Boston.  In that way, it would be more ceremonious and meaningful.  And, more children and families could attend since this would be nearby- not in New York City.  The Fisher House could then mail it to the Foundation.

Perfect.  Or so I thought.

We arranged for this big event.  Everyone wore red, white and blue.  We all met at the Fisher House, which had just been built that year (an important part later).  Beth, the Director, greeted Milly and the children with such warmth.  We were escorted into the living room where we unveiled the quilt.  Beth’s eyes were as big as saucers.  She hadn’t said anything.  Then she said, “Will you please excuse me while I go make a phone call?”  When she returned, I never expected to hear what she was about to say… stay tuned for Part 7.

I have been teaching preschool for over thirty years. This is my passion. I believe that children have a voice, and that is the catalyst to enhance or even change the learning experience. Emergent curriculum opens young minds. It's the little things that happen in the classroom that are most important and exciting. That's what I write about. I am highlighted in the the new edition of Jim Trelease's bestselling book, "The Read-Aloud Handbook" because of my reading to children. My class has designed quilts that hang as permanent displays at both the National Liberty Museum in Philadelphia, and the Fisher House at the Boston VA Hospital.
View all posts by Jennie →
This entry was posted in art, Early Education, Giving, history, Imagination, Inspiration, military, museums, patriotism, quilting, Singing, Teaching young children, wonder and tagged Fisher House Foundation, Imagination, Inspiration, Intrepid Museum, Milly the Quilter, quilting, Quilts and museums, Teacning children, USS Intrepid, Zachary Fisher. Bookmark the permalink.

72 Responses to The Legacy of Milly, Part 6