One of our most treasured and well-used classroom books is the Big Book of the World.  We love to look through the book as it shows not only physical maps of the world, continents and countries, but also animals, agriculture, and industry of countries all over the world.  When we begin to learn about a new place, be it a state, country, or continent such as Africa, this book is a perfect tool and a complement to our satellite map.  It was our first step, as we learned about Africa.

We spent at least two days “traveling”.  A satellite map was taped to a table.  We added magnifying glasses to get a close-up of both land and water, often getting sidetracked with discovery.  I asked questions:

What is the brown part of Africa?  Why is the water both dark and light blue?  Is there more land or more water in the world?  Where do you think the jungles of Africa are?

At this point we are clustered together, shoulder to shoulder.  Children have their own questions, typically beginning with “Where do I live?”  Yes, children need to learn where they live, and while we are learning about Africa we step back to find America.  Seeing it in the context of the whole world is important.

Our traveling expanded to include maps, travel tickets, real money, cash registers, clipboards, and pencils.  We have our very own travel box which comes along with us as we set up chairs to fly to Africa.

Now, we are excited and ready to learn!  We made a huge map of Africa, dividing it into the desert, the grasslands, and the jungles.  We learned that Jambo Rafiki are Swahili words for Hello Friend.  Of course we were eager to greet anyone and everyone with those Swahili words.  We practiced writing those words, along with Africa and the words of animals.  It became our hallway display, along with art work of painting maps and animals. 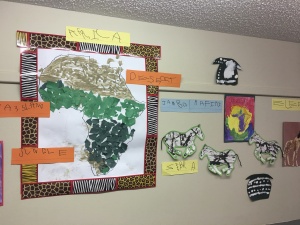 Animals are a favorite with children, and learning about African animals was even better.  We used large pieces of paper- tan, light green, and dark green- to represent the desert, grassland, and jungle.  Then we graphed animals using Beanie Babies to find out which animals lived where.  It was hands-on, and sometimes surprising, like discovering the crocodile lives in the desert.

1) Teachers role modeled quarrels, “I’m not inviting you to my birthday party!” then worked out the problems.  Children often learn far better in an indirect way when it comes to conflict.  2) Teacher Shelley did real African drumming in a traditional costume.  3) I told the story of Abiyoyo, a classic African folk tale and a favorite with children. 4) We ate!

Our grand finale was a play performance of the African version of the classic book, Caps For Sale- a book everybody loves.  The Hatseller tells the story of Ba Musa and his fugalan (bright colored) caps.  The monkeys chant “Hoo-hoo-hoo”. 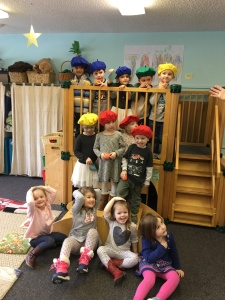 By taking the things children already know and substituting something new, such as the monkey’s chant, we open their world.  Preschoolers need to feel safe and grounded, yet they want to explore and learn.  Then, immersion can happen.  That’s what I do.

I have been teaching preschool for over thirty years. This is my passion. I believe that children have a voice, and that is the catalyst to enhance or even change the learning experience. Emergent curriculum opens young minds. It's the little things that happen in the classroom that are most important and exciting. That's what I write about. I am highlighted in the the new edition of Jim Trelease's bestselling book, "The Read-Aloud Handbook" because of my reading to children. My class has designed quilts that hang as permanent displays at both the National Liberty Museum in Philadelphia, and the Fisher House at the Boston VA Hospital.
View all posts by Jennie →
This entry was posted in Diversity, Early Education, geography, Imagination, Learning About the World, Teaching young children and tagged Abiyoyo, Africa, Caps For Sale, geography, Jambo rafiki, preschool immersion, satellite map. Bookmark the permalink.